As Tiny Homes Spread Across the Nation, They’re Getting Bigger—and Pricier

It wasn’t exactly a comedown when Spencer Wright, 31, and Bela Fishbeyn traded in their cramped Bay Area apartment for a 300-square-foot house a little more than two years ago. In fact, it’s actually been an upgrade in every way.

The home they bought for just over $100,000 in the Santa Cruz mountains in Boulder Creek, CA, wasn’t made for a hermit. Designed and built by New Frontier Tiny Homes, it has a king bed on a hydraulic lift for storage underneath, a walk-in closet, an outside deck about the size of the house, and an art installation made of reclaimed wood from 1767 Designs.

“The smaller the house, the more attention you can give to each little detail,’’ says Wright, a stay-at-home dad. He and his wife, the executive managing editor of the American Journal of Bioethics, wanted to experiment with a different way of living. “The goal was to make it so nothing would be missing.”

The tiny house movement grew out of the simplicity movement of the 1980s and 1990s. The goal was to build ultracompact houses (preferably without professional assistance) for next to nothing in someone’s backyard, to reduce consumerism and debt and return to a simpler way of life. But over the last 10 years, tiny homes have evolved—and they’re not so simple anymore. Buyers are increasingly seeking larger dwellings with top-of-the-line appliances and high-end finishes, and having builders do the labor for them.

Many of these units are now outfitted with stainless-steel appliances, built-in TVs, and elaborate cabinetry, says Mark Stemen, a geography professor who teaches sustainability at California State University in Chico. Luxurious tiny homes with composting toilets, solar panels, and insulation for year-round living can now go for more than $200,000.

More tiny home communities are opening across the country, as television shows such as HGTV’s “Tiny House Hunters” have led to a boom in popularity for little house living. These units typically top out at about 400 square feet. And now that more builders are getting into the game, and lenders are helping buyers get loans for the properties, prices are shooting up. Folks are also using them as vacation homes and renting them out when they’re not around.

“The tiny house movement is expanding to meet the desires and needs of the people who are in it and joining it every day,” saysColes Whalen, marketing director of Simple Life. The Jacksonville, FL-based developer is creating tiny home communities in the South. It recently unveiled a more expensive, nicer two-bedroom “tiny” home model that is about 540 square feet.

“It’s adapting to accommodate the needs of people who are tired of spending money on square footage they’re not using, but they may want slightly more” room, he says. 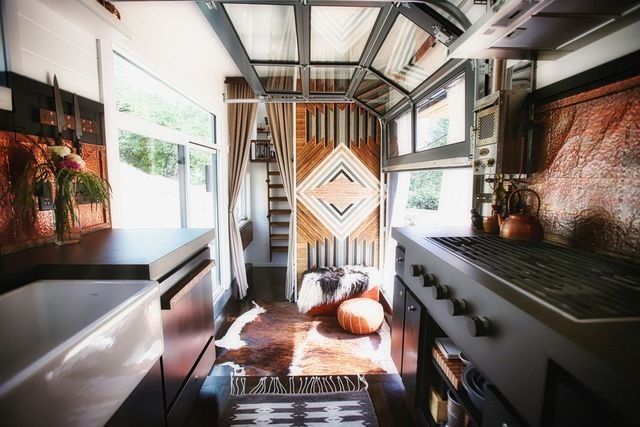 Spencer Wright and Bela Fishbeyn’s tiny house was outfitted so that nothing would be missing.

That’s prompted him to ask, “Are you still interested in a tiny house?”

The traditional, do-it-yourself 20-foot tiny homes can cost $15,000 to $20,000, including materials but not counting labor, says Louche. Those who buy pre-made shells then have the plumbing and electrical systems installed.

The company is certified and inspected by the RV Industry Association, in part to help buyers access insurance and financing. Buyers can now finance a tiny home ranging in price from $435 to $630 per month with a 15-year or 23-year term, based on a purchase price of $70,000 to $90,000, according to the company’s website.

The introduction of professional builders and manufacturers has allowed prices to stabilize at around $65,000 to $75,000 for a standard 28-foot finished tiny home, Tiny Home Builders’ Louche says. Anything priced higher than that is typically a lot swankier.

Buyers with money to spend are also working with design teams to customize their dream tiny homes. Tiny Heirloom, in Portland, OR, is selling abodes with motorized decks that retract in 30 seconds. These can go from $89,000 to $220,000. Some models are bought by companies like IKEA looking to showcase the latest tiny trends or by investors looking to rent them out.

But the actual cost of setting up a tiny homestead can actually be much higher, as folks still need to have land to put them on. That can be a challenge where there are unfriendly local zoning laws.

“They’re appealing to someone who is willing to pay for that,’’ Louche says.

Tiny homes still make sense for folks on a budget, even those looking for a more affordable second home. That’s what Chip Hayeswas thinking when he developed the Retreat at Deer Lick Falls near Monteagle, TN. The 48-home, gated subdivision features a waterfall, a communal fire pit, and lots of hiking trails nearby. Homes range from 400 square feet to just over 500 square feet.

Hayes had built second homes on Cedar Lake and Tims Ford Lake. But those normal-sized homes ran around $300,000.

The homes at the Retreat at Deer Lick Falls with land start at $100,000. There’s an additional $95 per month in homeowner association fees for landscaping and mowing. The subdivision sold out in two and a half weeks, Hayes says.

Real estate agents Jack Miller and his husband, Harlen Crossen, of Brentwood, TN, snapped one up right away. They spent $200,000 for a 550-square-foot house on 2 acres of land.

It’s roomy enough for a bedroom plus a couch that folds out into a queen-sized bed, enough space for a family or guests. The house has birch and cedar shingles outside, shiplap instead of drywall indoors, and granite countertops.

“It’s like Ralph Lauren got ahold of the cottage and shook it,’’ says Miller. Crossen loved the place so much he decided to become an on-site sales agent for the development.

The two hope to enjoy the place on the weekends and rent it out as well.

That’s also what Wright and Fishbeyn are doing in California. They lived in their tiny home for more than a year before putting it on Airbnb. Guests can now rent it out for $235 per night.

“Everybody can’t afford a $1.5 million second home,” says Miller. “But a lot more people can afford this, particularly if they can generate income for it.”