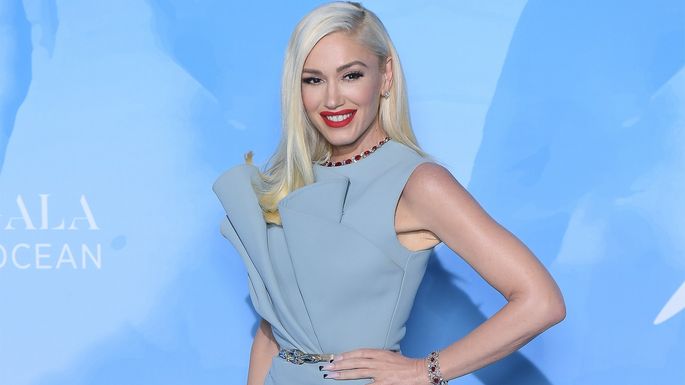 Stefani and her husband at the time, Gavin Rossdale, bought the place for $13.25 million back in 2006. So she probably still eked out a profit on the place—despite the money she and Rossdale spent on an extensive remodel, with the help of celebrity designer Kelly Wearstler.

Even the kitchen is black and white, with striped wallpaper and a black marble island.

There are also vast walls of white, which Stefani used as a showcase for her modern art collection. Other walls and ceilings are painted with elaborate murals that will stay with the house.

Floor-to-ceiling windows and glass sliders, strategically placed to take full advantage of mountain and valley views, also add to the carefully planned aesthetics of the home.

The decor is one of many unique touches in Stefani’s rock-star paradise, which is located in a guard-gated community.

If strolling about the 2-acre lot isn’t enough to get you in shape, the property has its own 1,500-square-foot gym. There’s also a nearby massage and sauna area, plus a fully lighted tennis court, a large infinity pool, a designer playground, and a green grass lawn roughly the size of a soccer field.

Each of the seven bedrooms has its own uniquely designed bathroom, but the master suite is the real dazzler, with two bathrooms and dressing rooms, as well as closet space everywhere.

Other luxury amenities include a chic home theater, a marble outdoor kitchen, and a fully decked-out guesthouse.

As if Stefani and Rossdale’s star power weren’t enough, the home has a sparkling pedigree. They bought the estate from the nightclub mogul Sam Nazarian, who had purchased it for $11 million from Jennifer Lopez in 2004. Lopez paid $4.3 million for the property in 2000. It’s reported that she and her ex-husband Marc Anthony tied the knot in the backyard.

Stefani and Rossdale finalized their divorce in 2016, and Stefani has moved on, into a relationship with her “Voice” co-star Blake Shelton. ETonline reported in August that Shelton and Stefani had purchased a home together in the Los Angeles area. The Daily Mail reports that Shelton is putting the finishing touches on a Hawaiian-style lake house on his 1,200-acre ranch in Oklahoma,.

Jade Mills of Coldwell Banker Residential Brokerage and Craig Knizek of The Agency were the listing agents. Stephen Resnick and Jonathan Nash of Hilton & Hyland represented the new buyer.