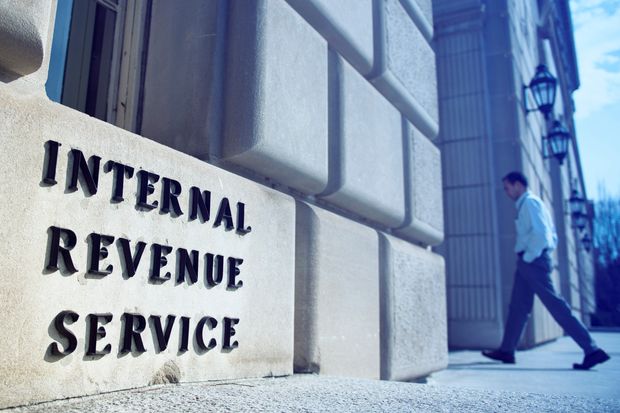 Photograph by Andrew Caballero/AFP/Getty Images
The last thing President Donald Trump wants is millions of angry taxpayers venting that they aren’t getting tax refunds because of the government shutdown. But the Internal Revenue Service may grant him a reprieve.

In a plan issued Tuesday, the IRS said it is bringing back more than 46,000 employees, about 57% of its workforce, for tax filing season, which kicks off Jan. 28. The IRS plan includes a legal argument for issuing refunds, stating that they’re to be paid from “permanent, indefinite refund appropriations,” similar to Social Security checks. The IRS also said that “activities necessary to issue the refunds may continue during a shutdown.”

Previous administrations had argued the IRS could collect taxes, but couldn’t issue refunds during a shutdown for two reasons: The money wasn’t approved by Congress in annual appropriations, and the act of issuing refunds wasn’t an essential government activity necessary to protect life or property (the only kind of government activity technically allowed during a shutdown). The IRS appears to be refuting those precedents. It may be in shaky legal territory and could face challenges to its refund position.

If legal challenges don’t gum up the refunds, other issues could. Some of those 46,000 workers who are coming back will be staffing phones to answer taxpayer calls during filing season. And the returning workers won’t all be paid during the shutdown. Many IRS workers may love their jobs. But whether they’ll be motivated to work regular business hours, call in sick, or slow things down until they get paid remains to be seen.

One other point worth noting: The IRS won’t be conducting audits during the shutdown. The agency plan states that audits don’t fall under the list of job functions that would be allowed without Congressional funding. That means that “all audit functions, examination of returns, and processing of non-electronic tax returns that do not include remittances” won’t be happening.

Does that make it open season for tax cheats? Hardly. The IRS has up to three years after a return is due or filed to start an audit. But that’s just for routine, spot-check audits that aren’t because the IRS suspects fraud or other irregularities. If the IRS identifies a “substantial error” in a return it says it can add additional years to the audit trail, though it usually doesn’t go back more than six years.

Failing to file a return, and hoping it falls through the cracks, won’t get you off the hook either. The tax men and women of the IRS may be on a break now. But they’ll be eager to get back to work soon, making it a bad idea for taxpayers to use the shutdown as an excuse to avoid paying what they rightfully owe.