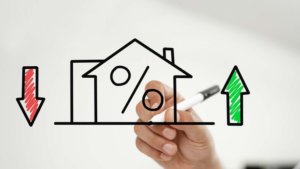 Mortgage rates are fast approaching 4%, a rate low enough that economists and lenders believe it will help jump-start the housing market again.

The average rate on a 30-year fixed mortgage fell to 4.06% this week, its lowest since January 2018, according to data released Thursday by Freddie Mac, the mortgage-finance giant. The rate was down nearly a quarter point from a week earlier, its biggest drop in over a decade.

In many cases rates are lower than 4%. Lenders advertising mortgages at sub-4% rates this week include Toronto-Dominion Bank, HSBC Holdings Plc and Teachers Federal Credit Union, according to Bankrate.com.

Just a few months ago, average rates were on the verge of hitting 5%, drying up refinancings and putting a damper on home price growth. While the housing market remains cooler than it had been at its peak, lower mortgage rates are again raising hopes for a rebound as the spring selling season gets under way.

Mortgage rates have been declining along with the yield on the benchmark 10-year Treasury note. The moves have been spurred by the Federal Reserve’s decision to pause its interest rate increases along with investor malaise about the expected pace of economic growth for the rest of the year.

That has created an opening for prospective buyers left on the sidelines after rates jumped.

“I was shocked,” he said. The $388,000 mortgage is for a second house he and his wife, Laura, are buying by the beach further south in the state.

Mr. Vaughan’s lender, Sanborn Mortgage Corp. in West Hartford, has been advertising the sub-4% rate in recent days, and it has spurred a lot of interest, according to Michael Menatian, the company’s president.

“People love it when they have a rate like that,” Mr. Menatian said. “Psychologically, it has a huge impact.”

While mortgage rates have fallen, a housing-market rebound faces other obstacles. After a brisk rise in home values in recent years, median prices were not affordable to the average earner in nearly three-quarters of counties around the country in the first three months of the year, according to an analysis by real-estate data firm Attom Data Solutions.

Still, there are signs of newfound interest among prospective borrowers as rates fall. Mortgage applications jumped 8.9% last week from a week earlier, according to the most recent survey by the Mortgage Bankers Association.

“It’s such a big move in rates, it’s prompting more potential home buyers to step back into the market,” said Joel Kan, the associate vice president of economic and industry forecasting at MBA.

Lower rates also are boosting refinancing applications, which jumped 12% over that span. As of last week, 3.3 million homeowners stood to save money by refinancing their mortgages, the most since January 2018, according to Black Knight Inc., a mortgage-data and technology firm.

A renewed boom in the mortgage market would be a benefit to lenders that were hard hit last year as rates rose. Roughly half of mortgages these days are originated by non-bank firms, which, unlike banks, don’t have other lines of business or large balance sheets to fall back on when business dries up. Many depended disproportionately on refinancings and had to slim down or merge as rates rose.