The longtime home of sportscaster Dick Enberg recently came on the market for $9.8 million. Located just blocks from the beach in La Jolla, an area of San Diego, the property spans two lots. 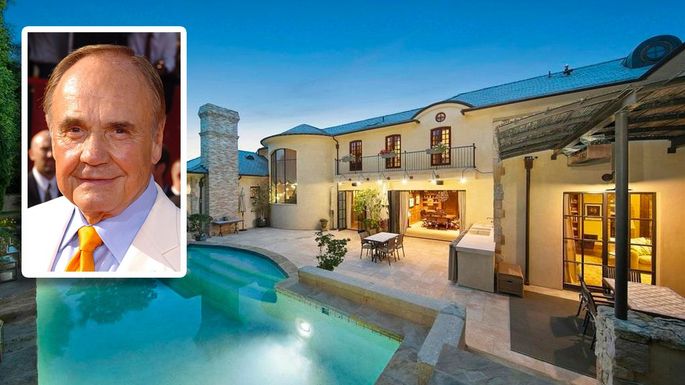 Enberg, who died in December 2017 at the age of 82, purchased the land in 1999 for $850,000. He then built a French-style chateau, which he filled with period-appropriate architectural elements and antiques, including pieces that date to the 16th century.

The 8,576-square-foot chateau has five bedrooms, five bathrooms, and three half-baths. There are also four fireplaces, two offices, and a four-car garage.

But those are mere stats. The real story of the home is its extraordinary craftsmanship. There are a variety of ceilings, including ones with murals, ones made of brick, and ones featuring antique wooden beams.

The flooring is varied as well, featuring wood, tile, and marble. The walls are covered with stately wood paneling, custom plaster, and patterned molding.

Other rooms of interest include a combination home theater and game room with an antique bar, a wine cellar, gym, and laundry/crafts room.

Outside there’s a kitchen, pool and spa, European statuary, and mature landscaping.

It’s an elegant respite with ocean views from most rooms. It’s also within walking distance of the La Jolla Village, an area many A-listers call home.

Enberg, whose career spanned nearly six decades, was a staple of national sports coverage on NBC. He was also a play-by-play announcer for UCLA Bruins basketball, Los Angeles Rams football, and San Diego Padres baseball (where he finished his professional career in 2016).